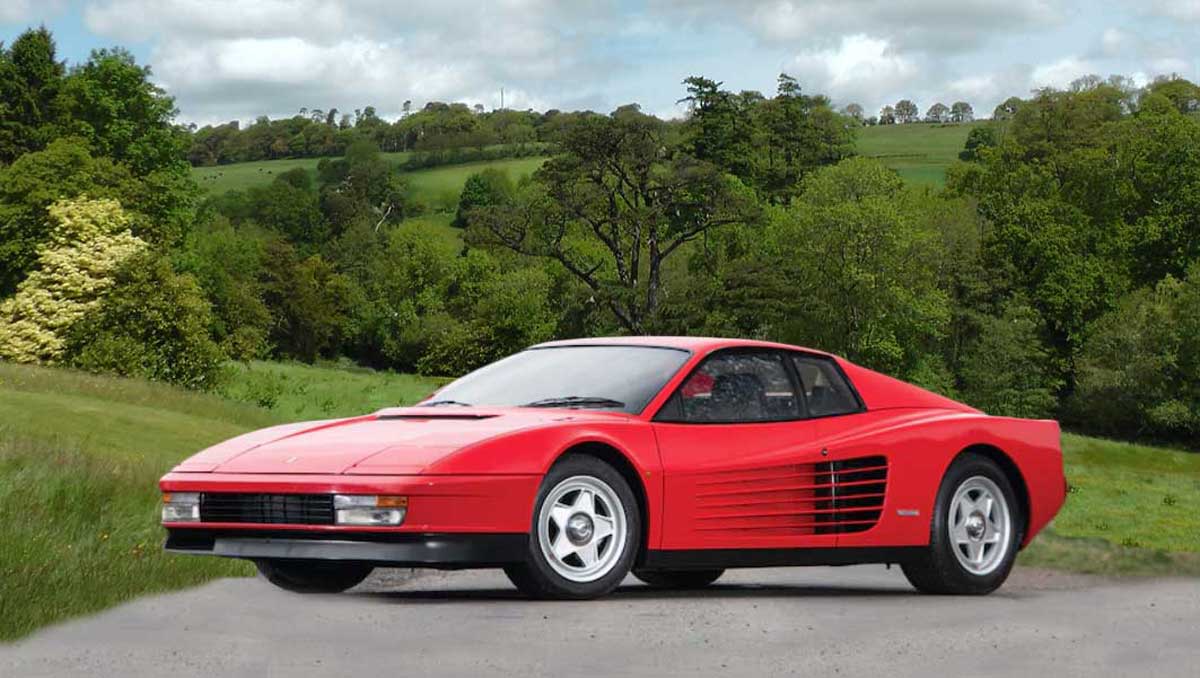 Enzo Ferrari might have been disappointed with the Mondial Cabrio but he would have been delighted by the Testarossa.

Testarossa in Italian means ‘redhead’. This referred to the red painted cam covers on this car. ‘Testosterone’ might have been a good name for it too. This was a real Ferrari with dramatic looks and performance to dream about.

Back in 1982 Italian design company Pininfarina was asked to come up with a design for the ultimate car. it had to be driven by a 12 cylinder engine, with a top speed of no less than 180 mph, be luxurious and have plenty of boot space to keep even the most long-distance motorist happy. The body was designed partly by designers and partly by the wind tunnel, to give excellent aerodynamic performance and as much of it was made of aluminium as possible, in order to keep the weight down.

It was a very successful car for Ferrari; it first went on the market in 1984 and stayed in production for seven years during which time around 7000 examples were made. There were then two model revisions, of the 512 TR and the F512 M which pushed total sales up to around 10,000 altogether. This was true mass production for such an expersive car.

Many people considered it to be a snip at the 1984 price of around US$100,000! I mention the US price rather than the UK one because the majority of them were left hand drive, so right-hand drive ones suitable for British roads were few and far between. It was very much a road car and was designed as a traditional long distance grand tourer; no-one was ever recorded as racing one on a race track although no doubt one or two tried their paces out against the odd Lamborghini Countach they came across on a freeway.

Performance was impressive. The five litre V12 pushed out 385 brake horse power giving a top speed of 180 mph. acceleration from nought to 60 could be achieved in 4.8 seconds.

It wasn’t perfect of course; no car is. Such a huge mid mounted engine needed plenty of cooling; but a number of government officials were unhappy about the large air intakes that were necessary for this; you never knew who or what could be sucked into one; and so side strakes had to be fitted which were sometimes laughingly called egg slices or cheese graters!

It wasn’t perfect from the driver’s point of view either. This was a wide car. Not only was the engine quite wide but twin radiators were fitted, one on each side of it giving a total width of six feet six inches. This was not a car for driving round narrow country roads. Fuel consumption can best be described as thirsty; it would take a good driver to achieve better than 11 miles to the gallon. Tyre wear, particularly at the back, could be heavy and these did not come cheap. This was also a complex car so regular servicing, including taking the engine out every three years or so to replace drive belts, was essential. Still, if economy was the priority the buyer could always choose a cheap Japanese car instead.